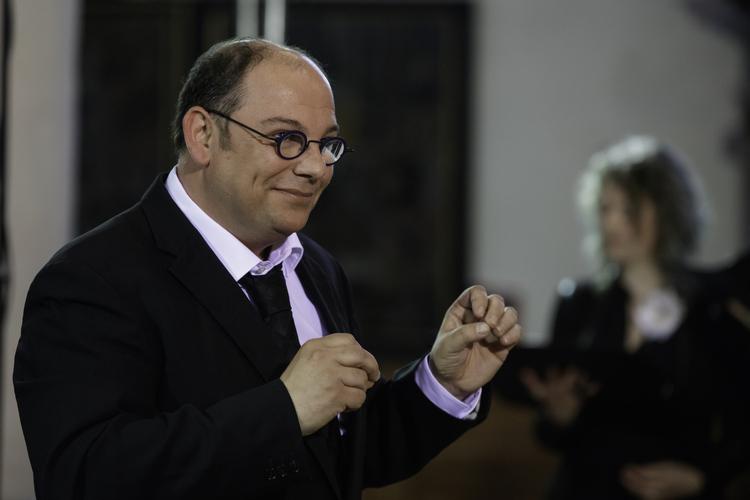 Patrick Debrabandere obtained his Master’s in Music, with the Music Pedagogy qualification in 1999 at the Lemmens institute in Leuven and Choral Conducting in 2001 from Erik van Nevel. As a ten-year-old, he sang his first notes in the choir Schola Cantorum in Ghent. Until 2009, he was a tenor in vocal ensemble Currende and Currende Consort. His search for innovative and mainly unknown repertoire and the concern for a dynamic and fresh approach of music are at the core of his career. This philosophy is also an important mission in his work as a music teacher at the Art Academy GO! in Ghent ('GO! Kunstacademie Gent'). There too, the vocal and choir context are extremely important, which has resulted in the establishment of the choir Vox Mago.

Patrick Debrabandere's enthusiasm for choral music subsequently led to the founding of the Ensemble Soratea. This is his personal sound lab with which he wants to concretize his musical interpretation in a professional and innovative way. This has already translated into a number of CD recordings. Again, his quest for unknown repertoire and concern for a dynamic and refreshing approach to music are constant pillars in his career.

Patrick Debrabandere is a tenor and took vocal classes with Jan Caals. As a vocal soloist, he prefers to interpret the baroque repertoire in the guise of a narrator, a role in which he wishes to profile himself, as in passions by J.S. Bach. For several years, Patrick Debrabandere has been regularly engaged as a guest conductor with various ensembles. He also frequently cooperates in quality accompaniment for choirs via the Flemish Federation for Young Choirs (Koor and Stem - Ghent).

As a teacher he is associated with the Academy for Music, Word and Dance of GO! in Ghent. There, too, the vocal and choral activities are very important to him, which resulted in the foundation of the choir Vox Mago. Vox Mago started out in 2008 as a select group of singers, and under Patrick Debrabandere’s professional leadership, has been growing ever since. Today, the choir comprises an enthusiastic and dynamic group constantly striving for quality, as the following quote illustrates: “vocally and in terms of interpretation a strong achievement and a pleasant, well-balanced choral sound in which harmonically everything is continually under control” (dixit. jury report, choir tournament 8 February 2015).

Because Patrick strongly believes in a direct communication between making and receiving sound, the desire grew to create a space in which chamber music can reflect its real character. In this project there is room for small-scale concerts where contact between performer and audience is minimal and vibrations are really perceived. Consequently, Kunststudio Living Art was born in March 2016. Concerts are not a final stage but offer a further growth opportunity for the performers through the distribution of these concerts on social media and Stingray BRAVA-TV!

In the new project MuziTaal, Patrick combines his passion for music with a different angle: the Dutch language. Together with Jorien Saelens, he shares the conviction that learning language in combination with other stimuli, such as singing, making music and experiencing Ghent's culture has even more to offer, sharing with others in a comprehensive language pool full of music and culture in the inviting setting of the city of Ghent.

If you have an urgent question, you can reach the artistic director Patrick Debrabandere by phone on the number below. If you prefer to respond in writing, please send us an e-mail.